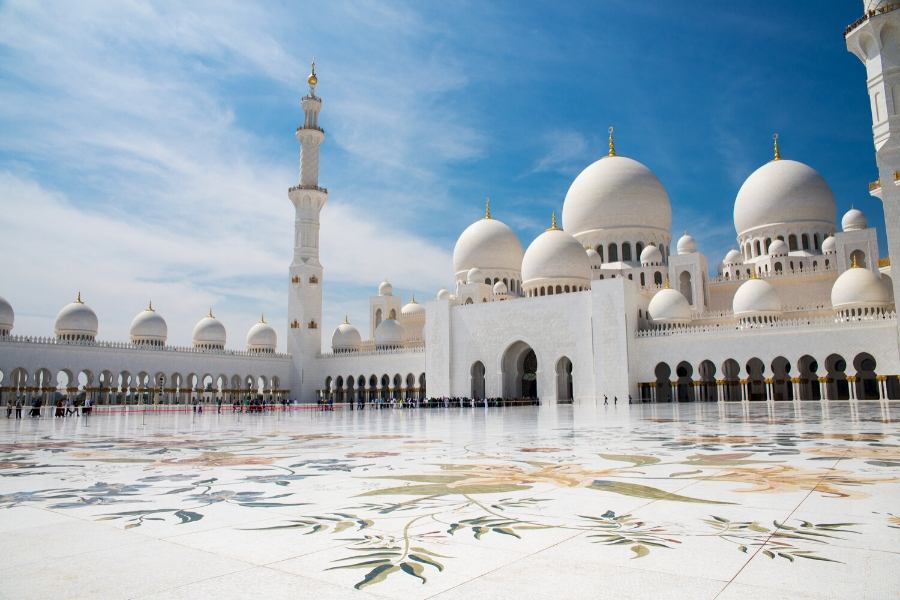 Interesting Facts to Know About the Sheikh Zayed Grand Mosque

Not only is it one of the most architecturally magnificent buildings in the world, but it is also an active house of worship accommodating up to 41,000 people.

The Grand Mosque in Abu Dhabi – officially The Sheikh Zayed Grand Mosque – is also the resting place of the Founding Father of the United Arab Emirates, the Late Sheikh Zayed bin Sultan Al-Nahyan “May Allah rest his soul in peace”.

Located at the entrance to the city on Abu Dhabi island, it’s hard to miss the Grand Mosque with its pristine white walls, domes and minarets during the day. Or maybe you prefer its soft nighttime glow (that changes according to the moon cycles) and awe-inspiring silhouette? It is undoubtedly a modern wonder.

So how do you visit the Grand Mosque?

Interesting facts to know about the Grand Mosque

COVID Update: Presently they are not allowing the free hire of clothing items due to health regulations. If you are deemed inappropriately covered you will be directed to the small strip of shops to buy an appropriate covering. They are fairly in expensive, but important to note at present there is not the free rental option. We don’t know if this will become more permanent. Think of it as an opportunity to pick up a unique Abu Dhabi souvenir…

Dining options at the Grand Mosque

No doubt touring the Grand Mosque, especially on a hot and sunny day is thirsty work.

There are now food outlets available in a newly opened visitor centre that attaches the mosque to the large parking lot. Note, no food and drinks should be consumed while touring inside the mosque itself.

There are many nearby hotels (more below) that offer dining options before or after your visit to the mosque.

Extend your trip to the Grand Mosque by also visiting Wahat Al Karama – translated as “oasis of dignity”.

The 45,000 sqm monument is located across the freeway from the Grand Mosque, next door to the Ritz Hotel and the General Headquarters of the UAE Armed Forces.  The site is a permanent tribute and war memorial to honour the UAE’s martyred soldiers and other Emiratis who sacrificed their lives for the service of the nation.

The site includes a Memorial with distinctive aluminium-clad slabs resting on one another, a Memorial Plaza with a beautiful reflective pool and a Pavillion of Honour. Open 9:00 am to 10.45 pm daily, Free.

Where to stay near the Sheikh Zayed Grand Mosque

The closest hotel, and the only one that is really within walking distance if the weather is cool enough, is The Ritz Carlton.  This imposing hotel is immediately over the freeway connected by the pedestrian bridge to Wahat Al Karama.  It’s also one of our top recommended stays for families with its restaurants and facilities if budget permits.

The best distance views of the Mosque are captured from Bab al Bahr, where there are several hotels, including the Fairmont, Traders Hotel and the Shangri-La.  When staying at these hotels, you will likely be charged more for a waterside/mosque view room but waking up to see this stunning beauty?  Completely worth it!

How to visit the Grand Mosque

From any hotel in central Abu Dhabi or Yas Island it is an easy taxi drive, and plentiful drivers wait in the taxi ranks to take you to your next destination.

The mosque is also a stop on the Abu Dhabi Big Bus tour.

From Abu Dhabi, you can also join a (paid) guided tour that includes a stop at the Sheikh Zayed Grand Mosque if you prefer something a little more personal with all your transport included. Why not try:

Visiting the Grand Mosque from Dubai

Even if you are staying in Dubai, the Grand Mosque is still frequently suggested as part of an essential Dubai itinerary.  Note that you are just over 1 hours drive without heavy traffic from Downtown Dubai to the Mosque.

You can hire a taxi (looking at 350 AED roughly), a private car (slightly more depending on size/quality of the vehicle), or look into joining an organized tour.

Below are some of our Get Your Guide partner suggestions for tour companies – bear in mind there can be a large price difference depending on whether you are part of a larger tour group or on your own private tour.

Another option is to book a private drive with GetTransfer – simply enter your destination, and the type of vehicle you would like, and drivers can bid to provide your service.

Can you visit the Grand Mosque during an AUH stopover?

If you are squeezing in a visit between flights from Abu Dhabi International Airport (AUH), it’s only a 15-20 minute drive away by taxi.  Allow yourself at least a 4-hour stopover with time to clear immigration at both ends. [Subject to holding a valid visa].

An airport taxi adds a 25 AED flag fall so expect a taxi to the Mosque to cost about 60-65 AED.  Your return taxi will be about 40 AED. There is a taxi rank at the Grand Mosque for your airport return.

If you are on a budget and coming from AUH via bus, the closest stopping point for the A1 route is at Zayed Sports City.  The fare at the time of writing is 4 AED per person one way.  It’s then approximately a 15-20 minute walk back to the Grand Mosque – not recommended in the summer heat but you may be able to catch a shorter taxi ride from ZSC to the Grand Mosque.

The opening time for tourists to the Sheikh Zayed Grand Mosque are:

The Grand Mosque DOES remain open during the Holy Month of Ramadan, with altered timings

Worshippers may enter at any time whilst visitors must pre-register, though entry is still free.

Cultural tours run every hour and do not need to be pre-booked. If you choose a cultural tour rather than a self-guided one, you will wait for the next group to run.

Yes, people of any religion are permitted to visit the Sheikh Zayed Grand Mosque in Abu Dhabi. If you are non-Muslim, you may only visit during visitor hours.

What is the entrance fee for the Grand Mosque Abu Dhabi?

There is no charge to enter the Sheikh Zayed Grand Mosque. You should, however, register in advance of your arrival.

Can I tour the Grand Mosque without a guide?

Yes, there’s no obligation to be part of a guided tour group or to join one of the cultural tours.

If this is your first visit to the Sheikh Zayed Grand Mosque though, we highly recommend a guided tour to get the most out of your experience.

What do you wear to the Grand Mosque in Abu Dhabi?

Visitors are expected to dress respectfully for the Grand Mosque. For women, this means having their entire body covered from ankle to wrist and neck and a head covering. For men, this is long trousers and shirts to at least elbow length.

We have a complete guide on what to wear to the Grand Mosque here.

What happens if I’m inappropriately dressed for the Grand Mosque?

Understandably, not all tourists, females in particular, may own the appropriate clothing and head covering required for visiting a mosque.

In usual times an abaya or Shayla could be hired for free to enter the building, but at present, due to COVID-19 health regulations in the UAE, you must provide your own appropriate covering.

Is the Sheikh Zayed Grand Mosque closed on Fridays?

No. Often this information is mistakenly shared, but the Grand Mosque in Abu Dhabi DOES open on Friday. The hours are restricted in the middle of the day to allow for the congregational Friday Prayer.

The exact opening time on a Friday has changed many times since the mosque first opened. As of Janaury 2023, the Friday hours for visitors to the Grand Mosque are 9:00 AM to 12:00 PM and 3:00 PM to 10:00 PM. This will alter during the Holy Month of Ramadan.

Is the Grand Mosque open to non-worshippers during Ramadan?

Yes, but with restricted hours. These change each year; our information here was last updated in February 2022 to reflect what is published on the SZGMC website.

12 Unmissable Cultural Places to Visit in Abu Dhabi in 2023

What to Expect at the National Aquarium Abu...

Exciting Things To Do On Yas Island This...

Fun Things to do This Winter on Al...