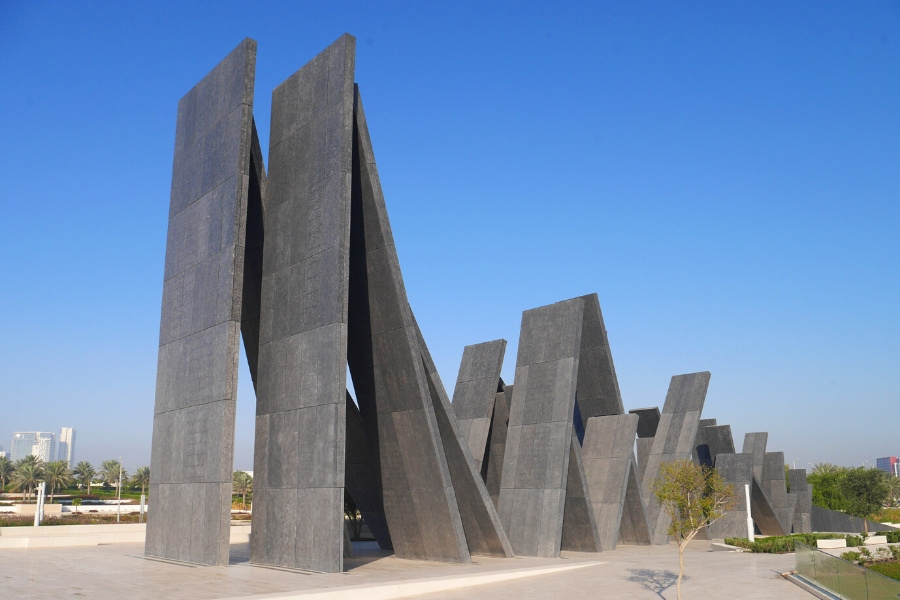 The eye-catching 45,000 sqm monument the “Oasis of Dignity” is located across the freeway from the Grand Mosque, next door to the Ritz Hotel and in between the UAE Armed Forces General Headquarters and the Ministry of Defense to the West.

The site is a permanent tribute and war memorial to honour the UAE’s martyred soldiers and other Emiratis who sacrificed their lives for the service of the nation.

The site includes a Memorial with distinctive aluminium clad slabs resting on one another, a Memorial Plaza with a beautiful reflective pool and a Pavillion of Honour.

Here’s how to plan your visit to this small but incredibly poignant and beautiful cultural attraction in Abu Dhabi:

Group booking should register in advance.

What to expect at Wahat Al Karama

“The oasis of dignity” – immortalises the names of the men who gave their lives for the UAE, making the ultimate sacrifice in service to their nation. Citizens, residents and visitors can pay homage at this beautiful and poignant monument.

The Visitors’ Center welcomes you to Wahat al Karama. Start your journey here with an interactive experience through four galleries that tell the story of the memorial and UAE’s heroes (martyrs).

You will also find a small souvenir shop in here (proceeds to Red Crescent) and a visitors book that allows you to express your feelings and see those who have come to pay their respects.

The Memorial at Wahat Al Karama

The Memorial itself comprises 31 massive aluminium-clad tablets, each leaning on the other, symbolising the unity, solidarity and mutual support that bind together leadership and citizens with the servicemen and women who protect them.

The long spine at the rear of the Memorial “The Allegiance Panel” is engraved with the Pledge of Allegiance of the UAE Armed Forces and symbolically supports the other panels.

The 4,000 square metre plaza is designed in a semi-circle shape, surrounding a shallow reflective pool. It is designed in such a way as to have a captivating view over the Memorial and the Sheikh Zayed Grand Mosque. Clad with travertine stone imported from Turkey, it has amphitheatre style terraces that can accommodate 1,200 guests. It is used for official military ceremonies, particularly Commemoration Day – more below.

Adjacent to the memorial you will find the Pavillion of Honour. This is a small geometrically shaped building reached down a small slope after you have visited the memorial.

The circular internal walls have been inscribed with the name of each UAE hero, their rank, branch, location and date of death. The plaques have been made from aluminium, reclaimed from armoured vehicles used by the UAE armed forces.

The roof of the building is made from eight slabs, signifying the seven Emirates of the UAE and the eight representing the heroes. The centre of the Pavillion has seven transparent glass panels surrounded by a pool of slow-moving water. Each panel is inscribed with the pledge of allegiance of the UAE Armed Forces.

There is much symbology to observe at Wahat al Karama and every time we visit we pick up new details, such as :

The largest annual event to take place at the venue is Commemoration Day (previously Martyrs Day). It was originally held to coincide with Wahat al Karama’s inauguration on 30 November 2016, however, the date has now been moved to 1 December (creating a 3-day public holiday combined with National Day on 2-3 December).

On Commemoration Day, UAE flags around the country are lowered at 8:00 am. A ceremony commences at the Memorial from 11:00 am. Around the country, all members of society are expected to observe a minute’s silence and offer a silent prayer to the nation’s heroes, in recognition for their immortal sacrifices for the nation.

LEARN MORE
What to Expect at the National Aquarium Abu Dhabi

Rulers of the emirates lay laurel wreaths and a 21-gun salute takes place. At 11:31 AM, flags are raised high, followed by the UAE’s national anthem. Families of heroes receive the Medal of Honor, followed by an official speech. The ceremony is then concluded with the missing man formation.

Although not a religious building, it is a place where you must act with dignity and respect. The dress code is not as stringent as the Grand Mosque, but you should still dress in a respectful manner when visiting the site, covered shoulders and knees for the ladies. A head covering is not necessary.

The memorial itself can make for some spectacular photos, but most cross over to Wahat Al Karama because of its magnificent views looking back over the reflective pond to the Sheikh Zayed Grand Mosque.

Photography is allowed here but you need to remain respectable. If you are bringing professional photography equipment its best to seek permission first.

If you are modelling here or acting in any way inappropriately, do not be surprised if security asks you to move on or leave; even if you are dressed appropriately it’s not the sort of behaviour befitting of the place.

(Never remonstrate when asked to leave or cover up at any place in Abu Dhabi or it can land you in hot water with the authorities).

When did Wahat Al Karama open?

The date of the inauguration also marks the day that the country’s lost its first soldier in the battle of the Greater Tunb in 1971.

How do you get in to Wahat al Karama?

It might look a little tricky at first; although it’s adjacent to the Grand Mosque it sits over a large freeway.

If you are getting dropped off by taxi or coming by road, it’s best to follow signage for the Ritz Carlton, there’s a slip lane near the Mosque to get under the freeway. The road is only one way so don’t miss your turn! Here you will find a large car park adjacent to the memorial, before the entrance into the Ritz Carlton.

LEARN MORE
Exciting Things To Do On Yas Island This Winter
Who manages Wahat Al Karama?

What hotels are near Wahat Al Karama?

You are immediately adjacent to the Ritz Carlton, which also offers many dining options within the hotel and the Venetian Village, perfect for visitors to enjoy after a visit to Wahat Al Karama.

Interesting Facts to Know About the Sheikh Zayed...