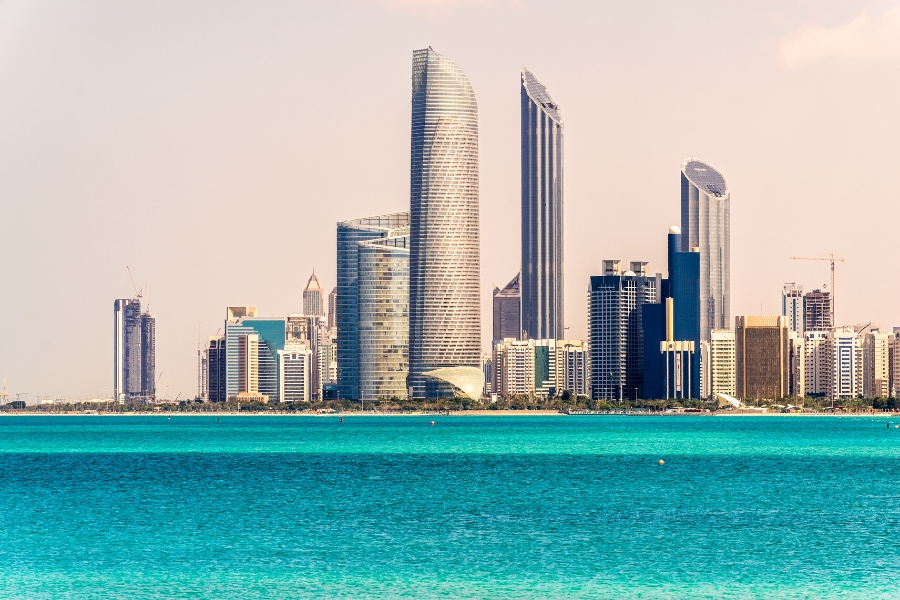 Where to find Abu Dhabi’s most incredible buildings

Whilst there’s no doubt Dubai has the reputation as the glitzy city of the Middle East, swathed in exceptional skyscrapers, Abu Dhabi is certainly not to be outdone in the architectual stakes. Arguably, the more beautiful buildings can, in fact, be found in Abu Dhabi!

It’s hard to choose our favourites so we’ll let you decide in this inspiring collection of the 15 most impressive and interesting buildings you won’t want to miss on a trip to Abu Dhabi.

It would be impossible not to start our journey through Abu Dhabi without starting at the iconic Sheikh Zayed Grand Mosque. Completed in 2007 after more than a decade of construction, the mosque covers over 30 acres and can house a staggering 41,000 worshipers both within the inner courtyard and the mosque itself. It is the third-largest mosque in the world.

The mosque is a stunning masterpiece of contemporary design, reflecting Persian, Mughal and Moorish styles. More than 3000 workers and 38 construction companies took part in the design and construction. Only the finest of natural materials have been used including marble, stone, gold, crystals and ceramics.

The Grand Mosque, sitting at the gateway to Abu Dhabi island is the city’s most popular attraction and is free for tourists of all religions to visit.

Top Tip: Free tours run daily in English beginning at 10:00 AM, 11:00 AM and 17:00 AM from Sunday to Thursday. Wear loose-fitting, long ankle-length trousers or skirts, and women must wear headscarves, or borrow these items for free at entry.

Not nearly as famous as the Grand Mosque, yet, with construction only being completed in 2018 but set to become one of the grandest must-see buildings in the world, Qasr al Watan is the UAE’s Presidental Palace.

It is a working government office, home to the Federal Supreme Council as well as open to tourists for most of the year for tours of the Grand Hall, library and gardens. The building is briefly lit each evening (now only Thu-Sat) for the Palace in Motion light and sounds show.

The cookie building, the smartie, the circle building, the coin building, even the Dirham building (local currency). It’s earned itself many nicknames since it’s completion in 2010 – but what is it!

This almost space-like looking object standing 110m high is actually a humble office building for Aldar Headquarters, the head office of major city developer Aldar. The world’s first circular skyscraper, it was voted the “Best Futuristic Design” by the Building Exchange Conference in 2014. There are 23 floors of working office space inside.

You will find Aldar HQ on the side of the E10 – the main highway from Dubai to Abu Dhabi at Al Raha Beach, shortly before crossing the Sheikh Zayed Bridge on to the island of Abu Dhabi. It is not open to the public.

Also colloquially known as “the Leaning Tower of Abu Dhabi”, this towering structure currently holds the Guinness World Record for the “world’s furthest-leaning man-made tower”. The Capital Gate is a 160m-tall tower which inclines at an angle of 18° westward – 14° more than Italy’s Leaning Tower of Pisa.

With 35 floors, it houses the ANDAZ Capital Gate hotel – complete with pool suspended from the 19th floor and sits above the Abu Dhabi National Exhibition Centre. The building also houses commercial offices. You will find it on Al Khaleej Al Arabi Street (30th Street) – guests can stay in the hotel or visit the restaurant on the 18th floor.

Another building with many names – from the Pineapple Towers to the Honeycombs, the correct name for this twin pair of towers on Sheikh Zayed Bin Sultan Street (E10 – corner with 19th Street) is Al Bahr Towers.

These shiny cylindrical structures are covered in geometric window coverings that react automatically to the sun to provide shade, reducing the need for airconditioning (so yes they serve a purpose, not just decorative!) The beautiful design is inspired by mashrabiya, the latticework window coverings often seen in Arabic Architecture. These panels are not wood, but made of Teflon-coated mesh.

Completed in 2013, the towers are now home to the Abu Dhabi Investment Council and Al Hilal Bank. They can only be admired from outside, they are not open to the public. On special occasions they will frequently be lit up with dazzling light presentations.

They are almost lost these days amongst the growing collection of skyscrapers on Reem Island. Internal access is for residents only.

The tallest building in Abu Dhabi at 92 stories high and the 25th tallest in the world, the Burj Mohammed Bin Rashid features an undulating façade designed to catch the sunlight at any angle.

The mixed-use business and residential building sits atop the Abu Dhabi World Trade Centre Mall and traditional Souk (3 floors of modern souk-style shops, built on the site of the city’s original commercial district), adjacent to the Abu Dhabi Corniche. Entry is only to residents and their guests.

Located on Abu Dhabi’s Yas Island, this popular landmark attraction houses – as you might guess – an indoor Ferrari theme park. Open since November 2010, it’s home to some of the fastest and most thrilling theme park rides in the world, including Formula Rossa which bursts out of the building at an astonishing speed of 240 Kilometres per hour.

The iconic red roof is more than 200,000 square metres in size and 48 metres tall at it’s highest point. Entry is by paid ticket to the theme park.

The ultra-luxurious Emirates Palace is one of Abu Dhabi’s most well-known landmarks. Although called a palace is it, in fact, a hotel operated by the Mandarin Orient group (previously Kempinski).

The hotel is the height of UAE extravagance, sitting at the western end of the Corniche. It neighbours Qasr Al Watan, the Presidential Palace as mentioned above.

Admission to Emirates Palace as a day visitor is free, and yes you can nip inside the gardens for a quick photo, though theoretically, the guards won’t let you through without a hotel or meal booking at one of the restaurants. Visitors are asked to observe strict dress standards including covered knees for gents.

Sitting in amongst the skyscrapers of Abu Dhabi, certainly the most eye-catching, sleek and impressive would have to be Etihad Towers, which sit immediately adjacent to Emirates Palace – each offers a spectacular view of the other.

There are five glistening glass towers that make up the Etihad Towers structure – just over 300m at its highest point. Three are residential, one is an office tower and one a hotel (previously called Jumeirah Etihad Towers, now Conrad Abu Dhabi Etihad Towers). From the 74th floor, visitors can enjoy the city’s highest observation deck at Observation 300 which gives some of the city’s best panoramic views.

Hollywood buffs may recognise the hotel from the 2015 film Fast and Furious 7, where two main characters steal a Lykan Hyperport and drive it spectacularly through three of the towers.

The ADIA HQ building on the Corniche is another architectual gem of the city skyline. It’s been overshadowed since completion my neighbouring Landmark – but it’s fairly commonly agreed the ADIA tower is the far more beautiful and elegant of the two. Inspiration for the undulating feature folds of the building came from traditional billowing boat sails and swooping sand dunes.

Like sister organization ADIC and Al Bahr Towers though not as obvious from outside, the building incorporates an active facade with a double glazed outer, single glazed internal skin and solar-controlled blinds to lower the cooling costs of the building. The commercial offices can only be admired from the outside.

Sitting in slight contrast to its beautiful ADIA neighbour on the Corniche is the Landmark Building. Another glimmering example of modern Arabian architecture, this mixed-use tower sits at an impressive72 floors and 324m tall.

Briefly the tallest building in the city, it’s now the third tallest building in Abu Dhabi being surpassed by Burj Mohammed Bin Rashid and the new ADNOC headquarters skyscraper. It’s another you’ll have to make do with photographing from the outside as there is no public access.

Inspired by both Islamic and Arabic design features, the stunning 24,000 square metres Louvre Abu Dhabi is found on Saadiyat Island. With the appearance of floating on the aqua waters of the Arabian Gulf this modern architectural marvel has been open to the public as a museum since 2017.

A global showcase of art and civilization, the inside is equally as beautiful as the distinctive outer dome which appears to hang weightlessly over the building – although it weighs 7,500 tonnes! The Louvre should be on every tourist’s must-see list in Abu Dhabi.

Another low-rise superstar on Abu Dhabi’s most important landmark buildings list, the W Hotel Abu Dhabi is the only hotel to straddle an F1 race circuit.  Sitting on Yas Island, the main feature of the hotel is its unique Grid Shell that transmits video feeds over 5,389 diamond-shaped, colour-changing glass panels. Every night a different message is emitted from the coloured dome.

Visitors are welcome to book a night’s stay at the 499-room 5-star property or enjoy a drink or meal at one of the many dining establishments.

Don’t let towering skyscrapers have all the fun, the major gateway onto Abu Dhabi island is a sight in itself not to be missed. A welcoming symbol of grandeur, the Sheikh Zayed Bridge which carries traffic from the E10 into the heart of the city over the Maqtah Channel (Khor ala Maqta’a) is one of Abu Dhabi’s prettiest structures.

Stretching 842m, the undulating curved structure is brilliantly lit at night with an ever-changing lightening program (yes, it changes every night!); subtle and beautiful, it is one of Abu Dhabi’s most graceful mega-structures.

There is no charge to cross the bridge (unless planned tolls ever do come in to play) and strictly no stopping – it also has one of the best birds-eye views of the Grand Mosque which often tempts tourists to stop.

We hope you’ve enjoyed our tour through some of Abu Dhabi’s most spectacular landmark buildings. You can check out more of Abu Dhabi’s top sightseeing and attractions here.

Take me back to the Abu Dhabi travel blog

Interesting Facts to Know About the Sheikh Zayed...