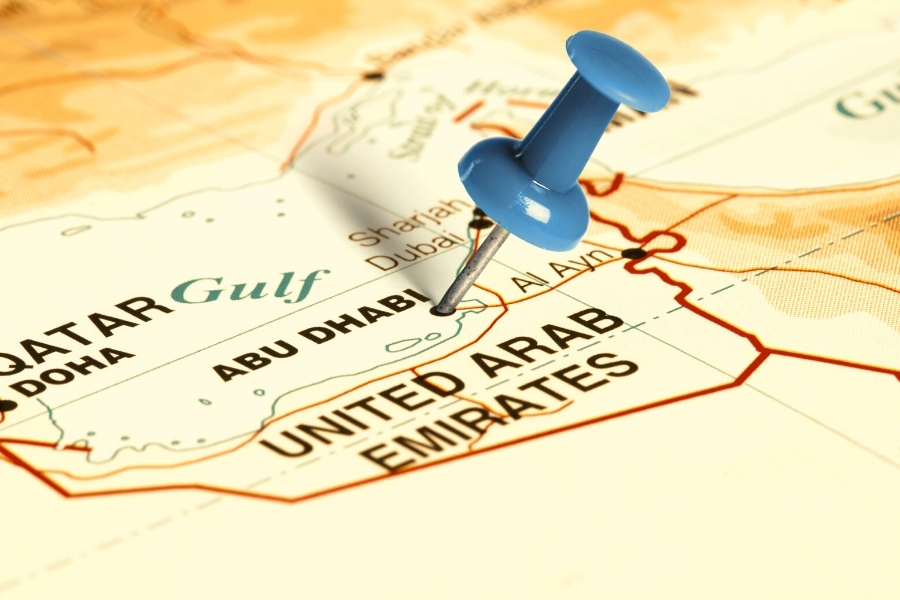 Where is Abu Dhabi? Fascinating Facts About the UAE Capital

Where is Abu Dhabi?

Abu Dhabi is the Capital City of the United Arab Emirates (UAE), a Middle Eastern country.

Abu Dhabi is also the name of the Emirate (or “state”) in which it is located.

Where is the UAE located?

The UAE is situated on the Arabian Peninsula.  To its southeast, you will find Oman, and to the southwest, Saudi Arabia.   The country faces the Arabian Gulf (or the Persian Gulf, depending on who you ask) and the Gulf of Oman to the east.

Is Abu Dhabi a country?

No, it is one of seven “Emirates” (or states) of the United Arab Emirates.

Is Abu Dhabi In Dubai?

No, a common misconception is that Dubai is actually the country, whereas Dubai is an Emirate, just like Abu Dhabi.

Abu Dhabi is by far the largest of the seven Emirates of the UAE, but Dubai is the most populous (and arguably the best internationally known, hence the confusion).

You can learn more facts about Dubai here.

What are the seven emirates of the UAE?

From west to east they are:

There’s no such thing as Abu Dubai!! This is just people getting the two UAE cities mixed up.

What continent is Abu Dhabi in?

The Arabian Peninsula is part of Asia. Most of the Middle East falls in the continent of Asia, with the exceptions of Egypt (Africa), Turkey (partly Europe) and Cyprus (closer to the Middle East but part of the EU).

You can learn more about the rest of the Middle East on our partner site familytravel-middleeast.com

How big is Abu Dhabi?

The city of Abu Dhabi – or Abu Dhabi Metropolitan area, is 972 square kilometres, spread over several islands and the mainland of the UAE.

What is Abu Dhabi’s population?

At the time of writing, no official census is performed in the UAE. From external sources, we believe the city of Abu Dhabi’s population is between 1.45 million and 1.8 million, whilst the whole country’s population is nearly 9.9 million.

Note that the UAE’s population largely comprises expatriate workers – some sources claim up to 90%!

Is Abu Dhabi bigger than Dubai?

By land size, yes! By a long way. By population, though Dubai is by far the larger of the two cities, believed to have a population of 3.5 million (estimated – updated as of March 2022).

Can you easily get between Abu Dhabi and Dubai?

Absolutely, the two cities are connected by road (no commuter train as yet – but watch out for the touted ultra-high-speed Hyperloop!)

There’s a great detailed guide here that explains all the different ways you can get between Abu Dhabi and Dubai, sitting approximately 160 kilometres apart.

Travelling between the two cities can take between one to two hours, depending on your start and finish point in each city.

Note that whilst there’s normally no border crossing point between the two Emirates, a border checkpoint was erected between the neighbours during the peak of COVID. Visitors from Dubai to Abu Dhabi emirate had to show they were COVID-negative or, later, a “Green pass” to cross the border.

The border crossing point is no longer used, but the barrier remains beside the freeway. The Green pass is no longer required in Abu Dhabi Emirate.

What does Abu Dhabi mean?

In Arabic, it means “Land of the Gazelle”.

How old is Abu Dhabi?

There is evidence of human life in what is now Abu Dhabi Emirate dating back 5000 years. Where Abu Dhabi city now sits on the Gulf coast dates back to the 18th century, when it was just a fishing and pearl-diving village for decades.

The discovery of oil in the 1930s was the start of the change in the Gulf nations previously known as the Trucial States. The British withdrew from the region in the late 1960s, and a new country was born – the United Arab Emirates.

The UAE federated on 2 December 1971, under the guidance of Sheikh Zayed bin Sultan al Nayhan, who went on to become the country’s first ruler.

This is considered the beginning of modern-day UAE and the country’s birth date.

Who is the head of Abu Dhabi

Sheikh Khalifa passed away on 13 May 2022; the former Crown Prince Sheikh Mohamed Bin Zayed (MBZ) took charge and is the current ruler (Emir) of Abu Dhabi and the President de Jure of the United Arab Emirates.

The President and Prime Minister of the country (currently Mohammed Bin Rashid Al Maktoum, Emir of Dubai) are determined by the Federal Supreme Council – the seven Emirs from the seven Emirates of the UAE.

The country also has a Federal National Council with 40 seats, members are elected by Emirati citizens with varying seats determined by each Emirates’ size.

In relative terms to the rest of the world, yes.  The UAE holds the 7th largest oil reserves in the world, and those oil reserves sit vastly within the desert regions of Abu Dhabi bordering Saudi Arabia.

How hot does it get in Abu Dhabi?

It is no secret that this is a desert city, and things get HOT in the summer! And by hot, we mean upwards of 45°c/113°F in July and August. And don’t forget the humidity that joins the party, too, particularly in September; the “feels like” temperature in Abu Dhabi regularly ticks over 50°c/122°F.

But not all bad news; there are plenty of months of the year where you get clear sunny days, nothing but blue skies, warm water and perfect beach weather.

You can check out more about Abu Dhabi’s weather and the best times to visit here.

What is the main language in Abu Dhabi?

The official language is Arabic. However, English is widely spoken and the most used in the service industry. Visitors will have no problems getting by with only English.

Given the country’s expatriate nature, dozens of languages are also spoken, including Hindi, Urdu, Farsi, Bengali, Samali, Tamil, and Tagalog, to name but a few.

What is the main religion of Abu Dhabi?

The UAE has a Sunni Muslim majority but do note that as much as 85% of the population is believed to be expatriates.  The majority of expatriates are also Muslim. However, there are large minorities of Christians, Hindus, Buddhists, Sikhs and Jews – basically, all religions are represented in some way.

Tourists may note the quite audible sound of “the call to prayer” several times a day. There is nothing you need to do as a non-Muslim tourist, and most businesses continue to operate over prayer times, unlike some Gulf neighbours.

When are holidays marked in Abu Dhabi?

Although the country follows a standard Gregorian calendar for schools, businesses and, of course, the seasons – the Hijri (Islamic) calendar is used to mark religious occasions. The most prominent of which is Ramadan – the Holy Month.

Note that in Abu Dhabi – and the rest of the UAE – they have shifted away from the Gulf tradition of Friday being set aside as the Holy Day. Government departments, schools and many private businesses in the UAE moved on 1 January 2022 to a Monday to Friday work week, with Friday a half-day so that people can still attend Friday afternoon prayers.

Saturday and Sunday are now officially the weekend in Abu Dhabi, though retail and hospital businesses run seven days a week. Many blue-collar workers will only get one day off per week, usually Saturday or Sunday.

You can pick up a calendar here to understand when the current UAE public and religious holidays fall each year.

What are the top tourist attractions in Abu Dhabi?

Abu Dhabi is home to many beautiful and fascinating modern Islamic buildings which are a must for all visitors to see and experience, including:

You can also find plenty of parks and outdoor spaces, theme parks, water parks, and historic buildings, including the restored Qasr al Hosn and stunning beaches to enjoy the mild winters.

What food do they eat in Abu Dhabi?

Given the vast expat population, it’s easy to get hold of just about any nationality of food!

Traditional Emirati restaurants may need a little tracking down!  You can try Meylas in Al Muneera. Also, Al Fanar Restaurant at Yas Mall has a good traditional offering.

All meat served in the UAE is Halal. The exception is pork which is scarcely available in restaurants as there are special licencing rules. You can obtain pork for home consumption at specialised supermarkets.

Can you drink alcohol in Abu Dhabi?

Whilst Muslims are forbidden from drinking alcohol, non-Muslims are free to have a drink but must abide by certain rules. For home consumption, non-Muslim expats must have a special drinking licence to purchase alcohol from specialised stores (this was abolished in 2020).

Note that drinking in public and public drunkness is strictly prohibited and come with hefty fines and jail terms. Always keep drinking in areas where it’s allowed and in moderation.

Do I need a Visa to visit Abu Dhabi?

Yes. In some cases, you will need to organise a visit visa in advance, but there are 20 countries whose citizens are permitted to obtain a FREE 30-day visa on arrival to the UAE.

Citizens of a further 40 countries can apply for a 90-day multiple entry visa. We talk more about UAE Visit Visas here.

Note that a full overhaul of the UAE visa system is expected in Ocotber-2022 – we will update this section when the proposed changes are brought into law.

For now, check out this guide from the UAE Government to ascertain your Visa eligibility.

What is Abu Dhabi’s time Zone?

What is the currency in Abu Dhabi?

Dirhams are further broken down into fils – coins are 1 dirham, 50 fil and 25 fil coins.  Any smaller coins are now all but non-existent, and many will simply round to the nearest dirham.

Do I need to be covered as a woman in Abu Dhabi?

As a visiting tourist to Abu Dhabi, no. In Abu Dhabi, women are not expected to be fully covered over heads and bodies. Out of modesty, however, women should not wear anything too tight and revealing.

At a minimum, tourists should aim to cover their shoulders and knees in public – this applies to men too. Attending religious or government buildings will require you to be fully covered. Abayas can be borrowed or bought at places such as the Sheikh Zayed Grand Mosque for this purpose.

We know the dress code in Abu Dhabi can be confusing, so we have a whole page dedicated to this topic here to help you with your Abu Dhabi packing.

Are there any more facts about Abu Dhabi you would like us to clarify? Drop your questions below we’d love to help.