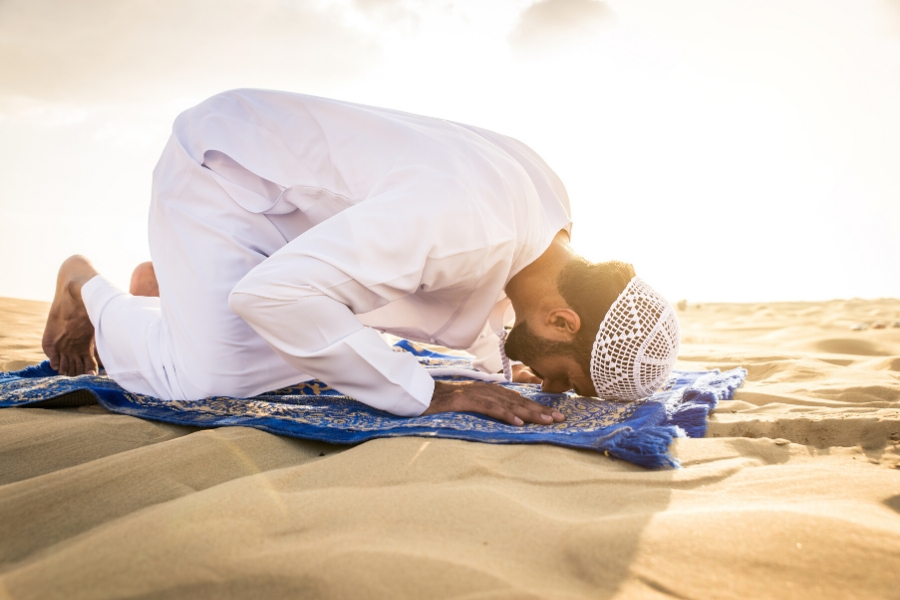 Understanding Prayer Time in Abu Dhabi as a visitor

As a tourist to Abu Dhabi, particularly if you come from a non-Muslim background, you may be curious to understand more about Muslim prayer times in Abu Dhabi; When do they happen? What happens during prayer time? And is there anything you need to do or observe as a tourist?

Muslims are required as one of the Five Pillars of Islam to perform Salat (prayer) five times a day. Islam is the official religion of Abu Dhabi and the United Arab Emirates so it is something you are bound to come across during your time in the country, be it hearing the call to prayer or seeing the signs for prayer rooms in the mall, or even the arrow on the roof of your hotel bedroom!

We’re here to help guide you through what prayer time in Abu Dhabi is all about.

How many times do Muslims pray each day?

Salat (or prayers) are performed at the following times every day:

Prayer times vary around the world as they are calculated based on the position of the sun. At each prayer time a set number of “rakat” or “rak’ah” – prescribed movements and words must be performed – more below.

What are the prayer times in Abu Dhabi today?

The “Call to Prayer”

The prayer times, as detailed above are made known by a Muezzin (caller) where “Adhan” is recited, usually from loudspeakers in a mosque. You will likely hear the call to prayer from most places in the city.

Midday prayers on a Friday (“Jumu’ah”) are of particular importance as they are a congregational prayer.

How are Muslim prayers performed?

All of these prayers are recited while facing “Qibla”- the direction of Kaaba, the sacred mosque in Mecca, Saudi Arabia. Muslims must wash before prayer in a procedure called “wudu”- purification. The prayer then involves a series of “rakats” – set positions and at every change in positions “Allah is Great” is said.

It is prefered that the prayers are performed in a mosque to allow for fellowship, but it may be performed anywhere. Men and women perform their prayers separately.

LEARN MORE
Abu Dhabi Money Matters: How expensive is the UAE to visit in 2022?

** That little arrow on your hotel roof is pointed towards Mecca!

There is no need for tourists to change their behaviour during prayer times, however, shops and restaurants are asked to cease music and entertainment during the call to prayer and until prayer time is over.

Some smaller shops may close briefly during these times, but generally speaking in large malls and in hospitality businesses you will not experience store closures.

Other religious observances in Abu Dhabi

Religious holidays in Abu Dhabi follow the Hijri Calendar, which varies from the Gregorian calendar by approximately 10 days each year, as it is subject to moon cycles. You can read more about Abu Dhabi religious & public holidays here.

This a complete list of observances on the Hijri Calendar this year, and how they correlate to the Gregorian Calendar.

The most important one for visitors to be aware of is the Holy Month of Ramadan. During this time, there are strict observances to be aware of, including day time fasting. You can learn more about what to expect in Abu Dhabi during Ramadan here.

Unlike neighbouring Dubai, Abu Dhabi no longer cuts alcohol service on the main religious holidays. As a visitor, there is little you need to observe on these days.

Can you visit a Mosque in Abu Dhabi?

The main mosque open to visitors in the United Arab Emirates is the Sheikh Zayed Grand Mosque, Abu Dhabi’s most beautiful and iconic landmark. If you’d like to learn more about the building’s importance and religion, it’s essential to turn up for one fo the timed tours (free).

You can learn more about visiting the Sheikh Zayed Grand Mosque here.

If you’d like to explore mosques more widely around the Emirates, check out this guide.

Visitors without access to their own car may find it handy to join a day tour (group or private) where you can visit several of the city’s main cultural sites with your own guide.

What are the Five Pillars of Islam?

As we mentioned, prayer is only one of the Five Pillars of Islam. In their entirety these are:

Read more on Islam and customs to be aware of in Abu Dhabi here.

We hope you will get to observe the beautiful cultural experience on the Call to Prayer and learn more about the Islamic religion during your trip to Abu Dhabi. If you will be extending your trip onward to Dubai, make sure you drop into the Sheikh Mohammed Bin Rashid Al Maktoum Centre for Cultural Understanding (SMCCU), found in the Al Fahidi Historical Neighbourhood – learn more here.