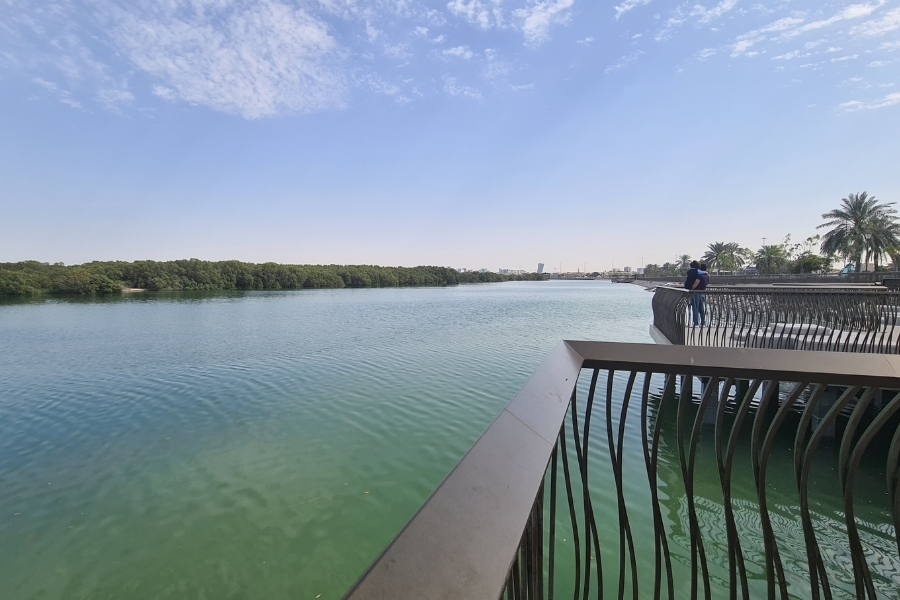 Doubling as an eco-tourist destination, you can spot local wildlife and stop along a heritage trail. Experience several water-themed education stations to learn about the local ecosystem, as well as a history-themed platform explaining the modern story of Abu Dhabi.

Also referred to some as the Eastern Corniche or Mangrove Waterfront, the newly-named Al Gurm Corniche overlooks the Mangrove National Park. You’ll find new seating areas, swings and viewing platforms making it the city’s new go-to family-friendly destination for a free stretch of your legs.

Old-timers might be pleased to hear that many of the parks heritage features including some of the concrete canopies and turret-style walls have been retained as features of the newly-opened parkland.

Open 24 hours, there are public fitness and workout stations along the path as well as refreshment areas and small cafes. Both walking and cycling (on a dedicated track) are permitted, and you’ll also find kayak tours on offer from private providers at the end closest to Eastern Mangroves

The best part of all, it’s completely free!

Al Gurm Corniche: How do you get there?

Parking is a little limited along the Corniche as you are right next to the main freeway from Dubai into Downtown Abu Dhabi.

You are best parking and exploring from the larger 300-car parking lot just before the exit to Sheikh Zayed Bin Sultan Street (in old language near intersection 19th & 8th – opposite the Pineapple Towers!).

You can also park where you access the newly refurbished Dolphin Park – another of Abu Dhabi’s iconic little picnic and play spots that first opened over 30 year’s ago!

Alternatively, you can park and walk from the Eastern Mangroves and Anantara Hotel, though parking can be very busy here especially evenings and weekends.

The return walk from either end will take around 90 minutes over 7kms if you allow for stops at each of the viewing platforms. It’s best enjoyed early morning and late evening as there’s limited shade from the sun. Approximately hald way along you’ll find Jarrah cafe for a refreshment break.

Understanding Prayer Time in Abu Dhabi as a visitor

Where is Abu Dhabi? Fascinating facts about the...

What to expect at the Louvre Abu Dhabi...